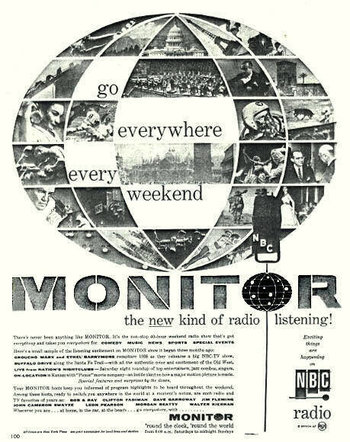 In 1955, American network radio was in bad shape, as television had been steadily luring away most of the older medium's audience. So NBC's then-president, Sylvester L. "Pat" Weaver (who'd already created Today and Tonight), came up with an idea to revitalize the network's radio division. On April 1, he took to the network's closed-circuit feed and over the course of about 40 minutes announced to the affiliates that something big was coming to NBC Radio: a "kaleidoscopic phantasmagoria" unlike anything that had been heard before... and, arguably, unlike anything that's been heard since.

This is the story of Monitor.

Following a "practice" hour on the closed-circuit feed on May 2, Monitor took to air on June 12, 1955 at 4:00 PM Eastern for eight hours, with the first hour simulcast on NBC-TV. The following Saturday, Monitor settled into its regular airing schedule of 40 hours, filled with news, sports, comedy, interviews, remote pickups from around the world, music, and far more than we could list here. The fast-paced show was presided over by hosts Weaver called "Communicators", in a set of mammoth New York studios NBC named "Radio Central".

Monitor was cut to 32 hours at the end of 1955 (no longer airing Midnight-8AM Sundays), but this was compensated in 1957 by adding a two-hour block on Friday nights, which in turn expanded to a weeknight two-hour block in 1959.

By 1961, however, the weeknight blocks were gone and weekend Monitor was cut to 16 hours. While the show remained in good spirits and was still as good as it had always been (helped by the fact that by the mid-1960s the show had 30 million listeners each weekend), by the 1970s NBC affiliates in the larger markets (including some of the network's O&O's!) began substituting local disc jockeys for Monitor, and as a consequence national advertisers began leaving in droves.

To NBC's credit, they tried to keep the show afloat - tweaking the music format, creating new musical IDs, and in June 1973 started having Don Imus, Wolfman Jack, and Robert W. Morgan alternate hosting the Saturday-night portion of the schedule (which at this point had little to no sponsorship) in an attempt to get back some of the stations that had stopped airing Monitor.

The beginning of the end came at 7:00 PM on November 4, 1973. Stations were finding their own identities, and Monitor's "something for everyone" concept wasn't working anymore...so Monitor was overhauled - the show now had "updates" at the 15- and 45-minute mark of each hour, a much faster pace, shorter features, and more music. In another attempt to get affiliates back, NBC created a "Custom Monitor" pre-feed containing Monitor promos and a few sponsored segments.

None of this really worked, however, and in 1974 it seems NBC began giving up: Monitor was cut to just 12 hours (9AM-3PM Saturdays and Noon-6PM Sundays), and the number of Communicators was cut to just four - Tony Taylor, Bruce Bradley, John "Big" Wilson, and John Bartholomew Tucker. Taylor and Bradley were gone by April '74, presumably in an attempt by NBC to cut corners a bit more, leaving Wilson and Tucker to do half of each day's six-hour feed.

Monitor ended on January 26, 1975 and was still heard on about 125 stations, although almost none were in major cities. A tribute site, run by Dennis and Bradley Hart and featuring lots of background info, pictures, and a hell of a lot of audio spanning the entire run, can be found here

. The name was also reused on NBC television in the 80s for a short-lived newsmagazine program (later retitled First Camera) that was NBC's attempt to compete against 60 Minutes and 20/20; it failed and was gone within a year.