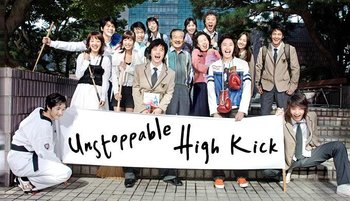 "High Kick without Hesitation", "Unstoppable High Kick", or "Smooth High Kick" was a popular South Korean situation comedy revolving around the life of the Lee family, taking place in Seoul. The main characters are Lee Yoon Ho, a Delinquent Badass Biker known for his high kick and Lee Min Ho, who enjoys spending time on scale models and blogs, are brothers born a year apart but attending the same class at school. These two portray completely opposite Korean teenage characters in a comical way.
Advertisement:

And of course, there’s the rest of the family, including:

High Kick! is a situation comedy, which portrays the everyday lives of the main characters colliding with each other in a comical way. However, at a certain point, the surprising mysteries of their seemingly normal surrounding characters begin to unravel one by one.

The English title of the show, "High Kick!", has several implications, one of which is the aforementioned oft-depicted high kicks of Yoon-ho.