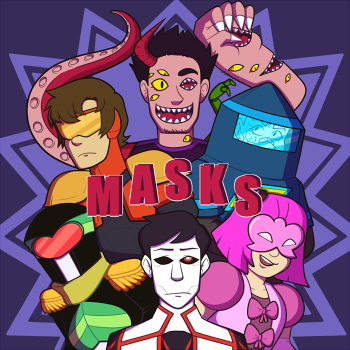 Roll to Breathe is a Tabletop RPG podcast playing games using the Powered by the Apocalypse engine, focusing heavily on character relationships and drama.

The first season is played using Masks: A New Generation. The plot centers on The Final Hazard, a ragtag group of teen superheroes as they learn who they are and deal with ever increasing superpowered threats. Members range from robot boys to powerless teens to amnesiac eldritch beings, banding together against destructive supervillains, antagonistic press, and the evil conspiracy headed by tech company Arch.rr.

The second season, named Steel City Rhapsody, is played using the Urban Shadows system. It focuses on a group of "friends" both normal and supernatural as they solve mysteries, make dirty deals, and live life in the city of Pittsburgh. If Pittsburgh was inhabited by faeries, werewolves, demons, ghosts, and wizards that is.

There is also a Patreon-exclusive season played using Epyllion. The adventure follows young dragons exploring a magical world, fighting the Darkness, and learning about the power of friendship. Uniquely, the players are divided into two groups (the Onyx Clutch and the Opal Clutch) running simultaneous campaigns in the same world.

You can find episodes here

or download them on iTunes. The Patreon and Epyllion episodes can be found here

Roll to Breathe contains examples of: