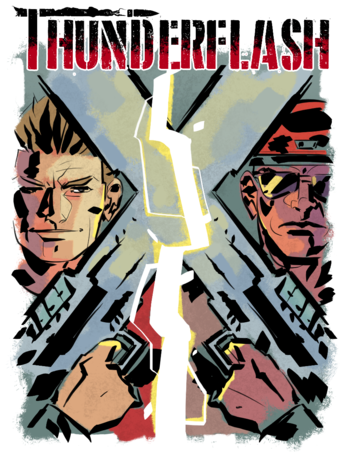 Thunderflash is a retraux style shooter made by Ratalaika Games and SEEP, described by the creators as a "love letter" to old-school, Run-and-Gun arcade games from the 80s, with Ikari Warriors being the main inspiration.

When a terrorist syndicate known as the "Bloody Wolf" stole numerous superweapons from the US Defense Department, two elite operatives from the Thunderflash Division, Rick and Stan, are dispatched to stop them. When Intel managed to locate the Bloody Wolf's headquarters in Kashmir, both Rick and Stan (or one of them on single-player) will launch a one-man assault.