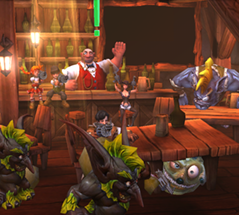 It only gets worse.
Advertisement:

Run 'n' Gun is an iOS game from Gaijin Entertainment, and a clone of the successful title Temple Run, with reversed roles. Rather than being the chased, you are the chaser, planting lead into the skulls of endless goblins that have stolen loot from the local pub.