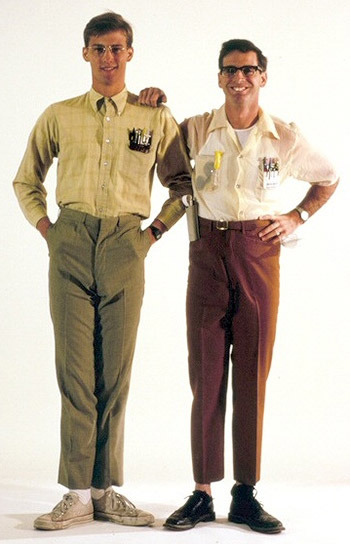 And then, just to show them, I'll sail to Ka-Troo
and bring back an It-Kutch, a Preep, and a Proo,
a Nerkle, a Nerd, and a Seersucker too!
"If you wanna be a nerd like me, you gotta make some unique sacrifices: No physical fitness, no social popularity, and most importantly — (adjusts specs) — no girls. Nerds before birds."
— Nerd, Angry Video Game Nerd: The Movie
Advertisement:

A Nerd is someone who...actually, it is easier to describe a nerd as what they are not. Not smooth, not handsome, and not someone you would instantly describe as 'attractive'. Not, above all else, popular outside a very narrow grouping of fellow-nerds.

The term gets conflated with geek fairly frequently, as it happens that a nerd can be fairly obsessive/informed about a particular topic. The nerdiest nerd is a nerd who isn't even a geek.

They are oftentimes a walking, talking fashion disaster. One of the odd features of the nerd on TV is that they will be formally dressed (probably as a result of Stock Costume Traits) usually, at least a plaid polo shirt and slacks. In fact, in real life, both nerds and geeks tend to dress more casually.

A nerd may be portrayed as pasty, weak, scrawny, with Nerd Glasses and optional Nerdy Inhaler. They may be covered in facial acne, have buckteeth, Braces of Orthodontic Overkill, wear pocket protectors filled with pens, and have Uncool Undies. They are likely to be bullied by the jocks. If a member of the opposite sex is anywhere within range, they Cannot Spit It Out. They may have a lisp, a high pitched, whiny voice, and be prone to spitting when they talk. Oh, and snort like pigs when they laugh.

They also like music like polka and accordions and play Dungeons & Dragons. Geek girls (and some guys) will have super frizzy hair, if it's not done up in Girlish Pigtails (the girls, not the guys), and the girls may have facial hair, unibrows, and be very hairy. They also display other "uncool" traits such as being a momma's/daddy's boy/girl or wetting the bed. They may also be obese, instead of scrawny.

It is almost like being a nerd is a bad thing.

These are the nerd stereotypes that were most prevalent in the 70s and 80s, the ones that feature in movies like Revenge of the Nerds, the sort that Bill Gates and Steve Jobs looked like back in the day. While not quite a Discredited Trope due to there being enough Truth in Television to Geek Physiques to keep this one running, more recent portrayals of nerdy characters have become less wholly undesirable, with many landing on an Endearingly Dorky portrayal or outright Nerds Are Sexy take. Then there is the Tech Bro who defies many of the "uncool" traits associated with the typical nerd by being an amalgamation of Fratbro, Corrupt Corporate Executive, and The Social Expert, taking after the younger generation of tech billionaires like Mark Zuckerberg and Jack Dorsey (though they may just be wholly unaware of their lack of coolness).

Like with Geek, the definition of a nerd is not set in stone and can vary greatly depending on context. For instance, Fonzie’s earliest uses of the term implied somebody who was average and middle class, in contrast to his own streetwise survival and fighting skills. Dr. Seuss’ nerd was a nonsensical (and grouchy-looking) animal in his zoo.

Reoccurring sub-types that have their own page include: Asian and Nerdy, Basement-Dweller, Bollywood Nerd, Black and Nerdy, Extraverted Nerd, Jewish and Nerdy, Lovable Nerd