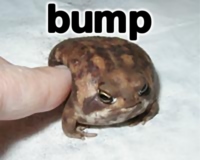 simply doesn't want the TLP to fall too far down the list and possibly be forgotten but doesn't have anything of substance to add.
Advertisement:

If a TLP is BUMPed several times in succession, it's a signal. What it signals may vary. It could be an overanxious OP, worried because there have been no new replies in a while. It may be someone who thinks that it's ready to launch, but who doesn't want to launch it themselves. It may be a TLP that was having thoughtful discussion about a particular point, but the discussion stalled, and the BUMPer is trying to get it started again so it can be resolved.