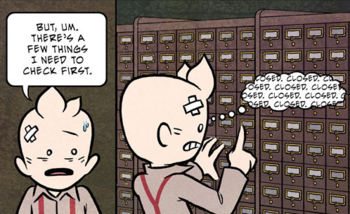 "I have CDO. It's like OCD, but with the letters in alphabetical order — like they're supposed to be."
— Chris Addison, Lab Rats
Advertisement:

Someone with Super OCD requires ORDER in their life. Everything has to match some kind of pattern that they approve of. Lines must be straight, angles must be just the right degree, and the numbers must absolutely match. This doesn't have to be a pattern that makes sense. Social skills will be extremely difficult. Sometimes this translates into Good with Numbers or Hyper-Awareness.

Obsessive-Compulsive Disorder is frequently misrepresented in fiction. Most people are surprised to find that rituals are not the defining trait of OCD — in reality, it is an anxiety disorder that causes repeated, unwanted thoughts. The rituals (which may or may not have anything to do with order) are simply attempts to stop those thoughts. Fiction so exaggerates the "order" part in OCD that people are downright dumbfounded to find out that it actually exists. Like other anxiety disorders, OCD exists on a spectrum and its presentation can vary greatly from person to person and from day to day (depending on how much stress the person is dealing with).

Obsessive-Compulsive Personality Disorder, on the other hand, really is all about order. Whereas OCD is an anxiety disorder, with compulsions and behaviors that alleviate anxiety from unwanted or intrusive thoughts, OCPD is a personality disorder. The person is globally meticulous and nitpicky, desiring order in every aspect of their life. Where someone with OCD is aware their behavior is irrational (which causes more anxiety, which needs to be relieved, which leads to more irrational behavior...), someone with OCPD doesn't suffer distress from their behavior and views it as The Best Way Of Doing Things; distress with OCPD comes from someone screwing with their system, not from their behavior itself.

There's nothing to prevent someone from having both OCD and OCPD at the same time. However, OCPD is quite rare.

Fiction can land all over the place on this one. Sometimes the person has one or two odd behaviors, sometimes the person is incredibly demanding and particular. Sometimes it's a crippling disorder that limits the character's ability to function, sometimes it's just a mild quirk. However, it's usually a Disability Superpower that turns the character into a super-detective or some such.

Can be justified if the character has a career in chemistry or engineering etc., where it really is crucial to have measurements just right, or a job such as bomb technician or infectious disease handler, where doing even one thing even a little bit wrong could mean death for you and others.

Often a trait of the Defective Detective or the Mad Mathematician. See also Schedule Fanatic, a person who requires everything to be done precisely on time. For a less extreme version, see Neat Freak. When this becomes a superpower see Clock King. A certain type of character will act like this for no other reason than to annoy people.