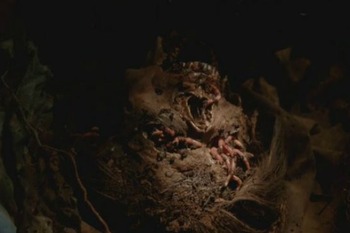 In short, Sherlock meets The Walking Dead.
"When does the path we walk on lock around our feet? When does the road become a river with only one destination? Death waits for us all in Samarra. But can Samarra be avoided?"
— Sherlock Holmes, "The Six Thatchers"
Advertisement:

Where there is a crime for Sherlock and John to investigate, there will always be moments like this that will make you want to puke.

A Study in Pink
The Blind Banker
The Great Game
Advertisement:

A Scandal in Belgravia

Jim: SAY THAT AGAIN!! Say that again, and know that if you're lying to me, I will find you, and I will ssssskiiiinnnnn you...

The Hounds of Baskerville
The Reichenbach Fall
Advertisement:

The Empty Hearse
The Sign of Three
His Last Vow

The Six Thatchers
The Lying Detective
The Final Problem

Eurus: You were my favorite.
Sherlock: Why was I your favorite?
Eurus: Because I could make you laugh. I loved it when you laughed. Once I made you laugh all night, I thought you were going to burst. Then Mummy and Daddy had to stop me, of course.
Sherlock: Why?
Eurus: Well, turns out I got it wrong. It turns out that you were screaming.