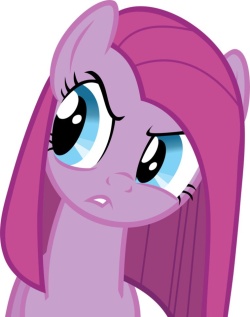 You're about to die.
This annoys me.
Advertisement:

is a My Little Pony: Friendship is Magic fanfic by Aegis Shield.

When Pinkie Pie's asleep, Pinkamina awakens. Using the clues provided by her alter-ego's Pinkie Sense, Pinkamina sets out to prevent the accidental deaths of Ponyville's citizens. As if her limited time to act wasn't problem enough, she also has to contend with a love-struck stallion, the ire of the Royal Pony Sisters, and the fact that all of these disasters may not be so accidental after all...

Also has a sequel: Seeing the Pattern 2: Death Take You.

was originally conceived but the author has since abandoned those plans.

Tropes common to both stories:

Tropes in Seeing the Pattern:

Tropes in Seeing the Pattern 2: Death Take You