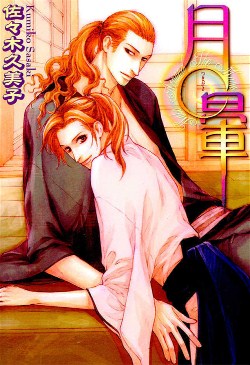 A one-volume manga set in the samurai era, Tsukigasa begins with a man with suspicious injuries showing up at Azuma's clinic. Azuma and Tatsumi quickly realize it's their old friend, Kuroe, who left 5 years ago after a sexual encounter which ended in Azuma cutting Kuroe's left arm off. It transpires that Kuroe was picked up by robbers after he left, and Tatsumi intends to arrest him. Azuma refuses to let Kuroe leave until he is healed and the trio spend a tense few days together.

The robbers eventually catch up to Kuroe, who reveals to Tatsumi that he was only a healer for the syndicate and was injured trying to run away with sensitive information when he found out their next target was Azuma. When they arrive at the clinic Kuroe dispatches them quickly, and Tatsumi pulls some strings to get him cleared.

Kuroe and Azuma try to resolve their issues from the past but fail until Toubee, Kuroe's father and Azuma's teacher, comes back and angrily chastises his son. Azuma overrides him and accepts responsibility for everything that happened, finally making his true feelings towards Kuroe clear. They become lovers and to Kuroe's surprise even Toubee forgives him for leaving, restoring back to him the idyllic life of five years ago.

Alternative Title(s): Halo Around The Moon