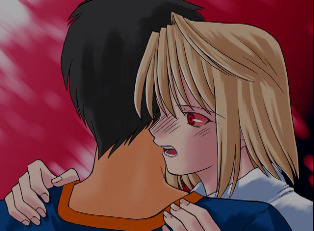 Told you not to do that.note For context, this is after Shiki rapes Arcueid, instead of controlling himself

Tsukihime is known for creating both paranoia for the player and Humanoid Abomination in the settings. The bad endings that you can get range from depressing and squicky to pure, undiluted Nightmare Fuel. Have fun sitting through forty bad endings to get 100% Completion...