Video Game / At Night in a Party: The Whisper of the Sea 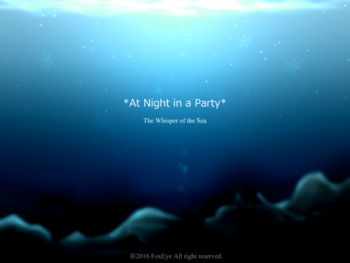 A mysterious voice echoes from the depths...
Advertisement:

At Night in a Party: The Whisper of the Sea is a Block Puzzle Game developed by underwater-driven Doujin Soft developer Fox Eye.

Karin is a young girl that was bored at her Christmas party. On that night, during her party, she heard not a cry, but a whisper of help coming from deep within the nearby sea. Fueled by her boredom, Karin decided to dive into the sea and follow that voice inside a sunken shipwreck. Can she manage to find the source of that voice without losing her life in these watery ruins?

This game combines Sokoban-inspired, grid-based gameplay with turn-based action and Fox Eye's recognizable Under the Sea setpieces and storytelling. The turn-based mechanics affect several things throughout the game, such as gauging Karin's Oxygen Meter, and the time before a bomb explodes. This game is also one of the few Fox Eye games with Multiple Endings, each showing how Karin manages her escape from the shipwreck.

This game was originally only a downloadable Christmas Eve event game in 2016 before the game subsequently vanished on the following Christmas Day. In 2019, it came back as one of the five games included in the Fox Eye Limited Game Collection. Its updates include improved artwork and a translated English version. The Japanese and English version of this collection can be purchased at DLsite.

Following the original temporary 2016 release of this game, Karin would later on reappear as a protagonist of a completely different game with the 2017 release of the Lighter and Softer but Hotter and Sexier Fox Eye ABYSS game Karin's Skin Diving Diary!

At Night in a Party: The Whisper of the Sea provides examples of: