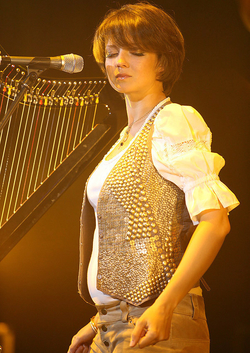 Natalia O'Shea (born September 3, 1976 as Natalia Andreyevna Nikolaeva in Moscow, Russia) is a Russian musician active since 1998, primarily in the folk-rock movement. She is a harpist, guitarist, singer-songwriter, performs under the stage name Hellawes, and leads three bands:

She is also a linguist, with a specialty in Celtic languages, and combines Celtic, Russian, fantasy, modern, and other influences in her music, which makes her popular with young people and the Role-Playing Game community. Besides performing in folk festivals and other concerts, and releasing her albums, she has gained fame over the Internet. She married Irish diplomat James Cornelius O'Shea in 2004, and they have two daughters, Nina and Una. Today, Natalia O'Shea divides her time between Ireland, Switzerland, and Russia.