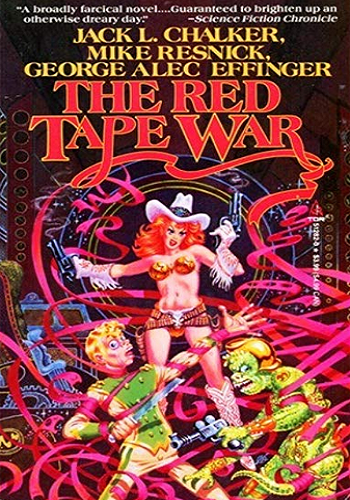 All three versions of Pierce come from universes with a Vast Bureaucracy full of Obstructive Bureaucrats, hence the title of the book.

In 1980, Jack L Chalker, Mike Resnick, and an unnamed third party got the idea to write a round-robin novel, in which each writer would write a chapter, putting Millard into a certain death situation, then hand the book over to the next writer, who would extract the character(s) from that situation, then contrive to put him in a worse one, then hand it off to the third writer, and so on.

After six months, the book was half finished, but the unnamed third writer's work "didn't quite fit the bill," according to Resnick, and both Chalker and Resnick had become a great deal more busy. They paid off the third author, and put the novel on the back burner.

When they got back together (at the same convention) in 1989, they decided the time was right to continue the story, but they needed a third author who was good enough to rewrite all of the chapters by their prior collaborator, well-known enough not to be intimidated by working with the two of them, and naive enough not to realize what a bad idea it was to join with them on the project.