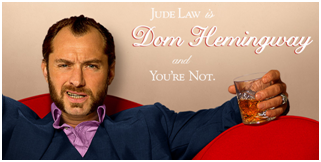 After 12 years in the big house for keeping his mouth shut about a safe cracking job, Dom Hemingway seeks to collect the money he's owed from his rich superior. Things quickly go downhill, however, as his time in prison had been shielding him from the gang violence, car crashes, and family drama that his reckless attitude causes to everyone around him.