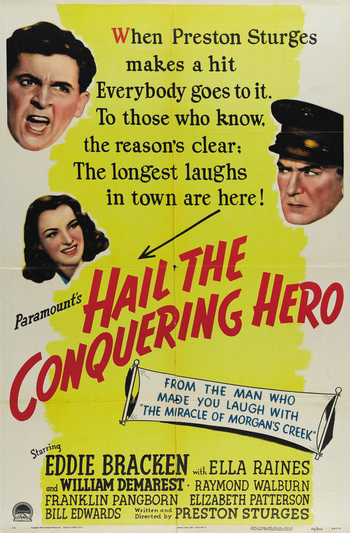 Hail the Conquering Hero is a 1944 Screwball Comedy by Preston Sturges, set during World War II.

Woodrow Truesmith (Eddie Bracken), the son of a Marine war hero from WWI, is a devotee of the Marines, and had enlisted in the hopes of living up to his family's name. Unfortunately, because of his chronic hay fever, he was discharged after a month. Ashamed of this, and unwilling to go back home and face his disgrace, he instead lied and wrote his mother that he had been sent overseas (getting a friend to mail letters from overseas), told his girlfriend Libby (Ella Raines) he had met someone else (so she could feel free to marry someone else), and took a job at a San Diego shipyard.

One night, Woodrow is sitting in a bar when a group of Marines, led by Sergeant Heppelfinger (William Demarest), come in and try to buy drinks with what little money they have (Heppelfinger tries to trade "war treasures", but the owner is having none of it). Seeing their plight, Woodrow buys them all drinks and sandwiches, and in gratitude, they join him. Woodrow, in turn, tells them his story, and they're all sympathetic - except for Bugsy (Freddie Steele), the most "troubled" of the Marines (he was shot, and hasn't fully recovered), and who doesn't like the idea of lying to their mother. So he makes a phone call to Woodrow's mother, telling her he's been wounded (Heppelfinger later changes it to a fever) and is on his way home. Woodrow is horrified, but Heppelfinger, who as it turns out served with Woodrow's late father, tells him not to worry, they'll take him home, and pretty soon, it'll all blow over.

Except it doesn't. When Woodrow and the Marines reach his home, they find a reception committee ready and waiting to honor a war hero (the other Marines have given Truesmith a uniform with medals on it), with a brass band, and the key to the city. Not only that, but the townspeople have taken it upon themselves to pay off the mortgage for Woodrow's mother. Not only that, but a group of townspeople want Woodrow to run for mayor against the current corrupt mayor. Not only that, but Libby, though she's engaged to the current mayor's son, is having second thoughts about that, and her feelings for Woodrow, which never went away, are coming back. Finally, the Marines get into the act, embellishing Woodrow's "heroics" even more, especially Bugsy, who will do anything to make sure Woodrow doesn't disappoint his mother...

This movie was the final movie Sturges made at Paramount. It was one of his biggest hits, and many critics then and now consider it one of his best films.