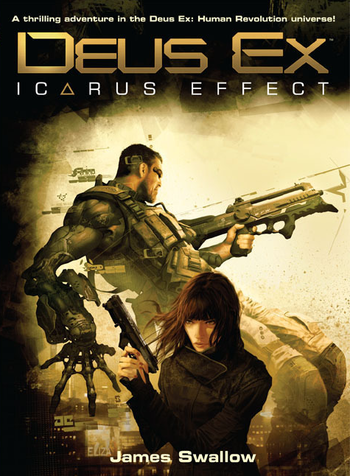 The heroes of another story.

Deus Ex: Icarus Effect is a prequel novel to the Deus Ex Universe, released in 2011. It takes place prior to Deus Ex: Human Revolution, and follows a special operative who begins to uncover evidence of a global conspiracy that threatens to shift the balance of power.

British Special Air Service operative Ben Saxon is the only man left standing after he and his unit are shot down over Australian airspace by a military drone. Looking for revenge, Saxon agrees to join the Tyrants, a group of augmented commandoes who undertake dangerous and politically-sensitive missions for the private military company Belltower. At the same time, Secret Service agent Anna Kelso survives an attack by the Tyrants and begins to delve into a complex conspiracy that resulted in the death of a prominent pro-augmentation CEO.

Saxon and Kelso's paths converge when they are both contacted by members of a shadowy hacker collective, who clue them in to a larger conspiracy involving the Illuminati and the imminent assassination of the leader of Humanity Front, William Taggart. Saxon is forced to go against his former comrades and work to stop the assassination while protecting Anna and fighting to stop a monumental shift in political power.

The book was released prior to Human Revolution's release, and features story elements and characters from both that game and the original game. It also received a video game sequel in the form of the mobile (later PC) title Deus Ex: The Fall, which covers some of the same ground as the book via flashbacks.