"What are you doing with that dog?"
(Q and Janeway look at the puppy the Captain's holding)
"I'm not talking about the puppy."
—Female Q 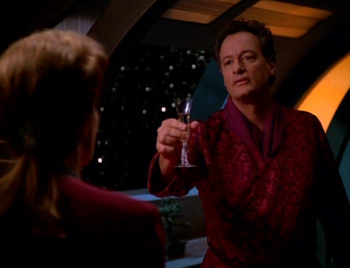 "Out of all the females of all the species in all the galaxies, I have chosen you to be the mother of my child."
Advertisement:

Q wants Janeway to have his baby so Hilarity Ensues. Oh yes, and there's a civil war tearing apart the Q Continuum.

Q and the dog

Q and the dog