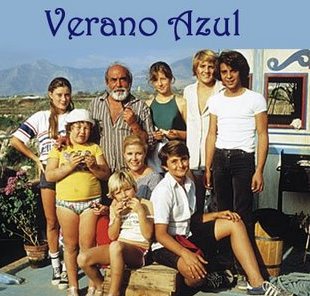 "Verano Azul" (Blue Summer) was a Spanish TV series that was filmed from 1979 to 1980, then aired from late 1981 to early 1982. It had 19 one-hour long episodes and was aired in TVE (Televisión Española), becoming a massive hit almost immediately. It's still very well-loved in Spain and fondly recalled in Latin America.

The series starts when seven Spanish kids (Beatriz/Bea and her brother Tito, Javi, Desi, Manolito/Piraña and Quique) go spend their summer vacations with their families in the Costa del Sol ("Coast of the Sun/Sun Coast'')

. The specific location is never fully disclosed), but the series itself was shot in Nerja

(Málaga province) plus some shoots in Motril and Almuñecar (Granada province)

. As they arrive there they befriend a local boy named Pancho, an old sailor nicknamed Chanquete, and a lonely painter named Julia who has just arrived to the place as well. Together, the group starts living life at its fullest...

Verano Azul has many tropes, including these: