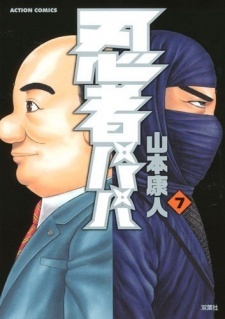 Ninja Papa is a manga by Yasuhito Yamamoto about a salaryman who is also a ninja.

Nobuo Matsuri is a typical salaryman. A fat, balding man of thirty-two, he works a low-paying dead end job in the customer service department of Bataph Foods. His boss is an incompetent fool who treats him like dirt, there's a thirty-five year mortgage on his home, and his nagging mother-in-law never misses an opportunity to point out his failings.

But Nobuo is happy with his life; he has a lovely wife and two kids who don't hate him. For Nobuo has a dark secret; he was raised in the Nakuru ninja clan and trained to become their top assassin. When he met his wife Aya for the first time, Nobuo knew love and abandoned the clan ways. So his former clan sends out hunters to kill Nobuo. Even worse, every so often Nobuo will run into someone who can't be reasoned or negotiated with, they threaten mortal danger to those he cares about, and he's forced to break out his ninja skills and become the merciless assassin of his youth.

As of 2012, the first three volumes of "Ninja Papa" are legally available in English on the Jmanga.com site.

Tropes that appear in Ninja Papa include: