Characters / Once Upon A Time Rumplestiltskin 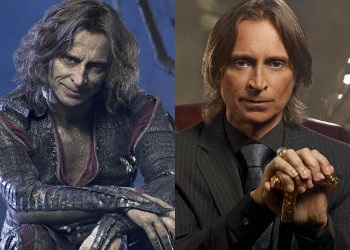 Rumplestiltskin: "All magic comes with a price!"
Mr. Gold: "Honesty has never been the best color of me."
Played By: Robert Carlyle, Wyatt Oleff (child)
Centric Episodes: “The Price of Gold”, “Desperate Souls”, “Skin Deep”, “The Return”, “The Crocodile”, “Manhattan”, “The Miller’s Daughter”, “Lacey”, “Nasty Habits”, “Think Lovely Thoughts”, “The Apprentice”, “Heroes and Villains”, “Darkness on the Edge of Town”, “Devil’s Due”, “Changelings”, “Ill-Boding Patterns”, “Beauty”, “The Guardian”

Rumplestiltskin is the manipulative and powerful "Dark One", who helps the Evil Queen / Regina Mills enact the Dark Curse for his own purposes. In Storybrooke, he enjoys a position of power as the wealthy pawnbroker, Mr Gold, and his memories of his former self are restored when he hears Emma Swan's name.