Characters / Once Upon A Time Main Characters 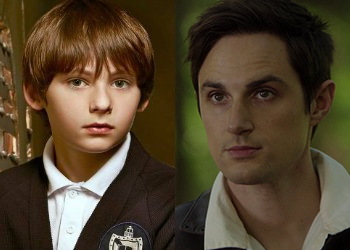 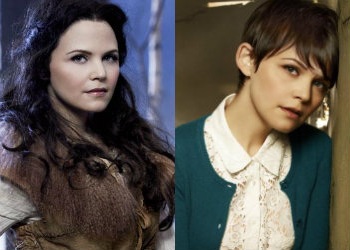 Snow White: "If people are supposed to be together, they find a way."
Mary Margaret Blanchard: "Believing in even the possibility of a happy ending is a very powerful thing."
Played By: Ginnifer Goodwin, Bailee Madison (child)
Centric Episodes:note "Pilot", "Snow Falls", "7:15 A.M.", "Heart of Darkness", "The Stable Boy", "An Apple Red as Blood", "Lady of the Lake", "The Cricket Game", "The Queen Is Dead", "Lost Girl", "Ariel", "The New Neverland", "A Curious Thing", "Unforgiven", "Best Laid Plans", "Labor of Love", "Heartless", "Awake"

The daughter of King Leopold and Queen Eva, as well as the stepdaughter of Queen Regina. In Storybrooke, she's an elementary school teacher named Mary Margaret Blanchard. 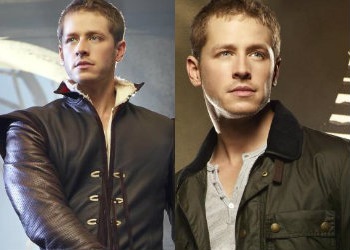 Prince Charming: "No matter what you do, I will always find you."
David Nolan: "There's a difference between literal truth and honesty of the heart."
Played By: Josh Dallas, Luke Roessler (child)
Centric Episodes: "Pilot", "Snow Falls", "The Shepherd", "7:15 A.M.", "What Happened to Frederick", "Heart of Darkness", "An Apple Red as Blood", "A Land Without Magic", "Lady of the Lake", "The Cricket Game", "Lost Girl", "The New Neverland", "The Tower", "A Curious Thing", "White Out", "Unforgiven", "Best Laid Plans", "Siege Perilous", "Heartless", "Murder Most Foul", "Awake" 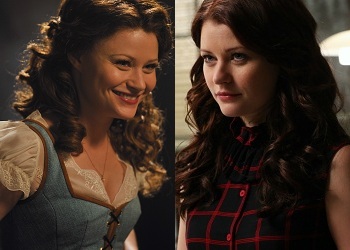 Belle: "I learned a long time ago that when you find something that's worth fighting for, you never give up."
Lacey: "You're not who I thought you were...and I'm glad. You really are as dark as people say."
Played By: Emilie de Ravin
Centric Episodes: "Skin Deep", "The Outsider", "Lacey", "Quiet Minds", "Family Business", "Heroes and Villains", "The Bear and the Bow", "Her Handsome Hero", "Changelings", "Beauty"

The bookish, intelligent daughter of Sir Maurice with a thirst for adventure. She forms a romantic, but troubled relationship with Rumplestiltskin. In Storybrooke, she is an amnesiac Jane Doe locked up in the mental ward of the hospital.

The Wicked Witch of The West/Zelena/Kelly West

The Wicked Witch of the West/Zelena/Kelly West 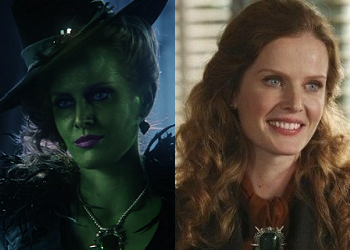 Zelena: "That would be a bit too, well, evil for my tastes. No. I've got to show my daughter who her mommy is. Wicked."
Played By: Rebecca Mader, Christie Laing (disguised as Marian), Isabella Blake-Thomas (child)
Centric Episodes: "It's Not Easy Being Green", "Kansas", "Our Decay", "Sisters", "Where Bluebirds Fly", "Secret Garden", "Chosen"

The primary antagonist for the latter half of Season 3 and a powerful witch. Formerly representing one of the four elements of magic, innocence, she bears a grudge against Regina and took over the Queen's castle in her absence. 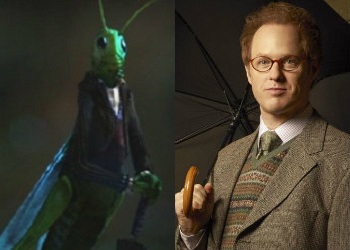 Jiminy Cricket: "Giving into one's dark side never accomplishes anything."
Archie Hopper: "You'll ruin my life? You'll do your worst? Because I will always do my best."
Played By: Raphael Sbarge, Adam Young (child), Morgan Roff (teenager)
Centric Episodes: "That Still Small Voice"

The son of vile criminals whose desire for an honest life results in his transformation into a cricket. In Storybrooke, he's a psychiatrist named Archie Hopper. 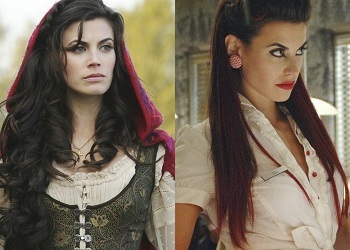 Red Riding Hood: "When there's something I want, I'm good at tracking it down."
Ruby: "I'm pretty sure I'm just gonna screw it up. I mean, I'll screw up with flair, but..."
Played By: Meghan Ory
Centric Episodes: "Red-Handed", "Child of the Moon", "Ruby Slippers"

A confident young woman from a small village with a dark secret. In Storybrooke, she's a flirtatious waitress named Ruby. 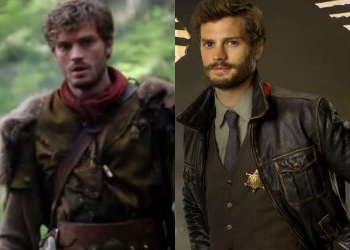 The Huntsman:"I gave up my heart so that the Queen would spare Snow's. Don't let my sacrifice be in vain."
Sheriff Graham Humbert:"It's my heart, Emma. I need to find it."
Played By: Jamie Dornan
Centric Episodes: "The Heart Is a Lonely Hunter"

A quiet, introverted Huntsman who is employed by Queen Regina to kill Snow White. In Storybrooke, he's the town's sheriff who is having a secret relationship with Regina Mills. 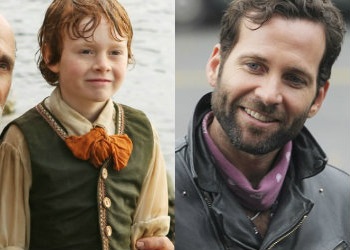 Pinocchio: "I don't wanna go. I don't wanna leave you!"
August Booth: "If you need evidence for everything, Emma, you're going to find yourself stuck in one place for a long time."
Played By: Eion Bailey, Jakob Davies (child), Rustin Gresiuk (teenager)
Centric Episodes: "The Stranger", "Selfless, Brave, and True"

The son of Geppetto, Pinocchio is saved from the Dark Curse and sent with Emma to be her protector. However, he abandons her early on and takes the alias, August Booth, only to return to Storybrooke many years later. 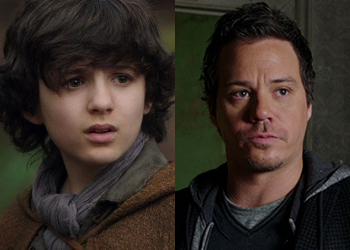 The beloved son of Rumplestiltskin and Milah who grows to fear his father following his transformation into "the Dark One". 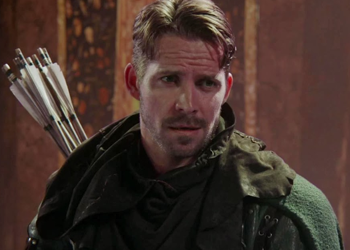 Robin Hood: "I may be a thief, but I have a code, and I have to live by that code. Otherwise, what kind of life am I living?"
Played By: Tom Ellis, Sean Maguire
Centric Episodes: "Witch Hunt", "Heart of Gold"

A thief who tries to steal a magic wand from Rumplestiltskin in order to heal his true love, Marian. He escaped the Dark Curse the first time around, and he eventually finds a second love in the form of the former Evil Queen, Regina Mills. 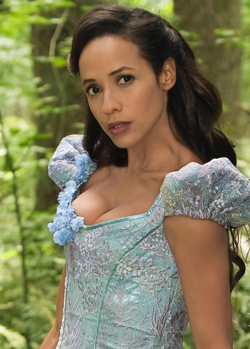 Jacinda: "I have a lifetime of memories of Jacinda, a struggling single mom who never thought she'd have romance in her life again."
Played By: Dania Ramirez, Alejandra Pérez (teen)
Centric Episodes: "Hyperion Heights", "The Garden of Forking Paths", "Pretty in Blue"
Lucy Mills-Vidrio 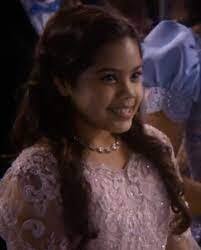 Lucy: "You're waiting for the perfect first sentence, but no story is perfect. It just needs a start."
Played By: Alison Fernandez
Tiana / Sabine 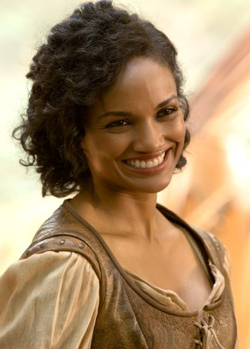 Sabine: "I can fight my own battles. I always have."
Played By: Mekia Cox
Centric Episodes: "Greenbacks", "A Taste of the Heights"
Lady Tremaine/Victoria Belfrey 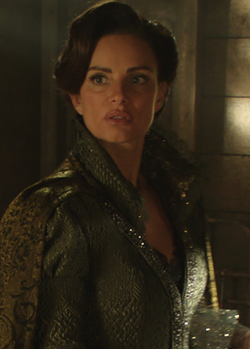 Lady Tremaine: "I sacrificed everything for my family. And the only thing I ever got in return was pain."
Played By: Gabrielle Anwar, Meegan Warner (young)
Centric Episodes: "One Little Tear"