Characters / Once Upon A Time Enchanted Forest

The denizens of the primary fairy tale world that avoided the Evil Queen's Dark Curse. 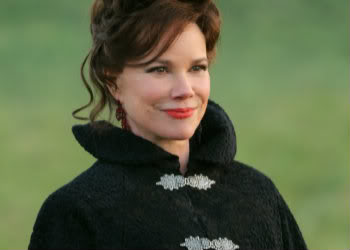 The ambitious daughter of a miller, the highly manipulative mother of Regina, and the tyrannical Queen of Hearts in Wonderland. 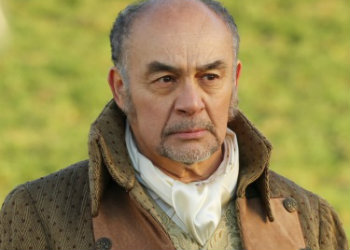 Henry: "Power is seductive, but so is love."
Played By: Tony Perez, Zak Santiago (younger Henry)
'''Centric Episodes:'’’ “Souls of the Departed”

The husband of Cora, who is quite benevolent towards his daughter, the Evil Queen, and always sticks by her side. 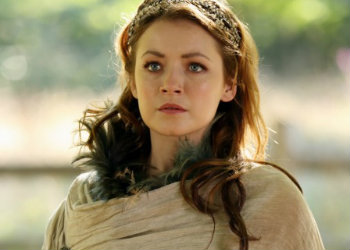 Princess Aurora: "I've had my fill of rest."
Played By: Sarah Bolger

The true love of Prince Phillip who was placed under the Sleeping Curse by Maleficent. 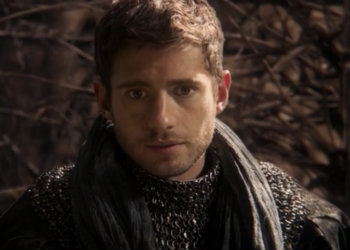 Prince Phillip: "There are new dangers now; but they're nothing we can't handle."
Played By: Julian Morris

A prince shielded from the Dark Curse who travels with Mulan to find Princess Aurora. 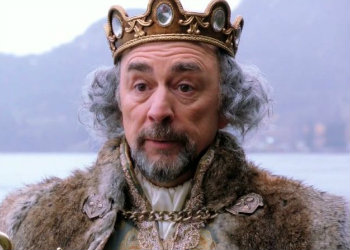 King Leopold: "I seek nothing more than the happiness of all who set foot in my kingdom."
Played By: Richard Schiff, Eric Lange (young Prince Leopold)

The father of Snow White and husband of Queen Eva, then later Queen Regina. 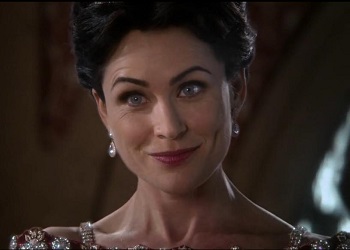 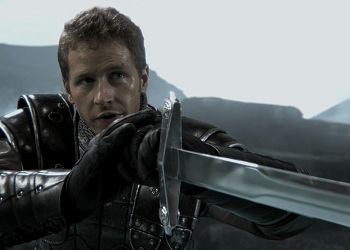 David's twin, who was adopted by King George and raised in his image. James was set to marry Princess Abigail until his sudden death. 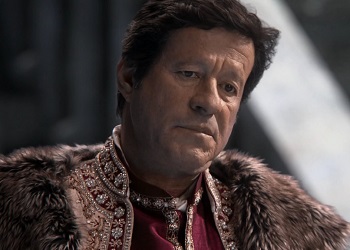 The father of Prince Henry, and Regina's grandfather. 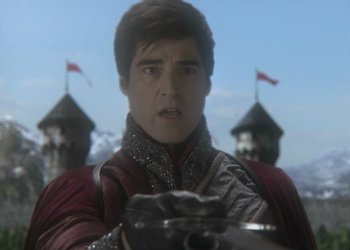 Sir Gaston: "I am Sir Gaston, and you, beast, have taken—"
Played By: Sage Brocklebank, Wes Brown

The former betrothed of Belle back in the Enchanted Forest. 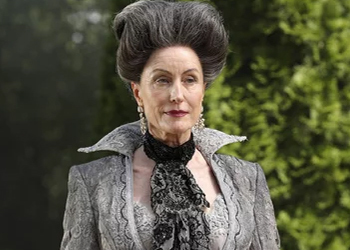 Lady Tremaine: "Girls, I've scraped and fought your whole lives for this... an invitation to the Royal Ball... and a chance to dig your claws into a prince."
Played By: Lisa Banes 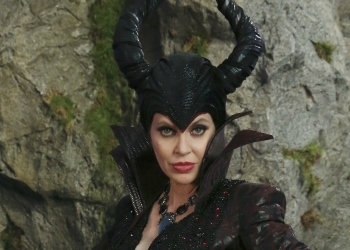 Maleficent: "I only care about one thing ... your pain, and that it be as long and terrible and unyielding as my own."
Played By: Kristin Bauer van Straten
Centric Episodes: “Darkness on the Edge of Town”, “Unforgiven”, “Enter the Dragon”

A powerful part-dragon witch, an old friend of the Evil Queen and archenemy to Prince Phillip and Princess Aurora. For a time, she, Cruella De Vil and Ursula form an alliance referred to as the "Queens of Darkness". 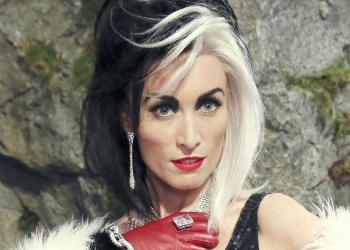 Cruella: "Some people struggle not to be drawn in to the darkness. But ever since I was a little girl, I've said... "Why not splash in and have fun?""

Played By: Victoria Smurfit, Milli Wilkinson (young)
Centric Episodes: “Darkness on the Edge of Town”, “Sympathy for the De Vil”

A young woman who originated from a world out of time styled after 1920s England. Seemingly trapped by an abusive mother she sought out the Author's help in escaping. Somehow she gained the ability to control animals and made her way to the Enchanted Forest, where she teamed up with Maleficent and Ursula.

Ursula: "Next time you claim to be me, you'll find out just how real I am."
Played By: Yvette Nicole Brown (voice)

A goddess whom Regina impersonated to trick Ariel. The sea witch Ursula is named after her. 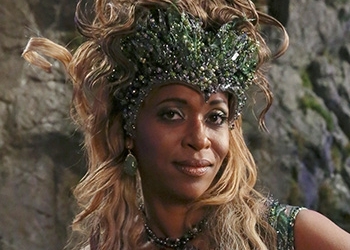 Ursula: "For too long we've lived in a world where the heroes always win."

A powerful sea witch who is the daughter of Poseidon himself. 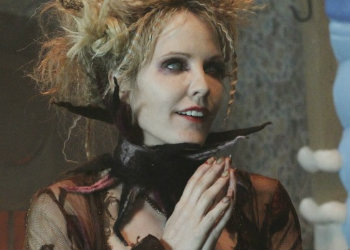 The Blind Witch: "I smell dinner!"
Played By: Emma Caulfield

A cannibalistic witch living in a house made out of gingerbread and other sweets. 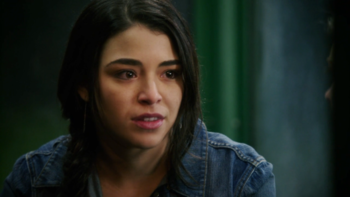 Lily: I know what it's like to live someplace where it feels like no one cares about you, let alone understands you.
Played By: Agnes Bruckner, Nicole Muñoz (teen)
Centric Episodes: “Lily”

A girl who helped Emma swindle a store when she was younger, quickly becoming her best friend. It fell apart when Emma learned that Lily was lying about being a fellow foster child and had actually run away from her adoptive parents.

Other Practitioners of Magic 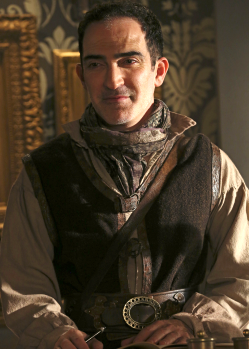 Isaac: I think folks are sick of heroes getting everything in these classic fairy tales.
Played By: Patrick Fischler
Centric Episodes: “Sympathy for the De Vil”, “Operation Mongoose Part 1”

The Author was a position handed down through the generations meant to magically record the many stories throughout The Multiverse. Eventually, a man named Isaac Heller became the Author, and began to write the stories of the people of the Enchanted Forest, creating the Once Upon A Time storybook that Henry loves. However, he mysteriously disappeared shortly before the Dark Curse was cast.

His identity is the Driving Question of season four, motivating Regina, Henry, Rumplestiltskin, the Queens of Darkness and Emma alike to learn of his whereabouts. 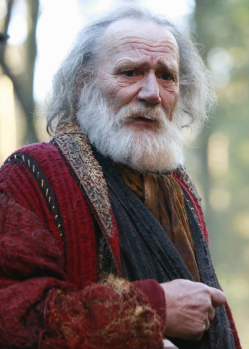 The Apprentice: I can see you have many questions. Fortunately, I have many answers.
Played By: Timothy Webber, Graham Verchere (child)

The emissary of the legendary Sorcerer, who has spent five hundred years protecting the Worlds from the forces of Darkness while helping make sure the many stories of the realms are remembered throughout the ages. 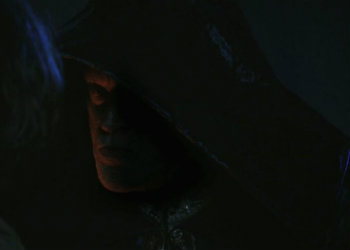 Zoso: "All magic comes with a price... and now, it's yours to pay."
Played By: Brad Dourif

The former Dark One, who tricks Rumplestiltskin into obtaining his powers. 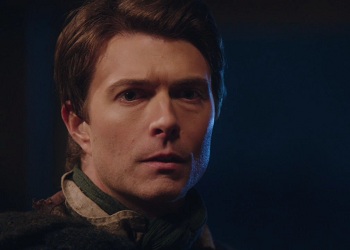 Daniel: "Who cares about magic? True love is the most powerful magic of all. It can overcome anything."
Played By: Noah Bean

A stable boy working for Cora's family and the young Regina's secret lover.

A sea captain and the older brother of Captain Hook. He travels to Neverland in search of a plant that supposedly cures any injury.

Robin Hood's wife, who dies between Seasons Two and Three. 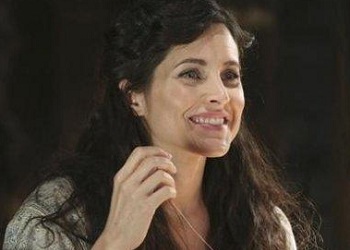 Milah: "I need a break. Run home, Rumple. It's what you're good at."
Played By: Rachel Shelley
Centric Episodes: “Devil’s Due”
Rumplestiltskin's former wife who abandoned him and Baelfire to be with Hook.
Robert

The birth father of David and James, who died when they were both boys. 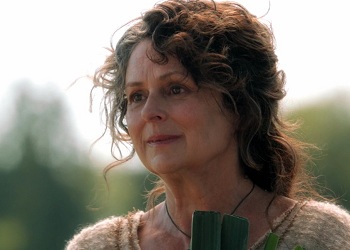 Ruth: "True love follows this ring wherever it goes, my son... Take it, and I'll know you'll be happy."
Played By: Gabrielle Rose, Tara Wilson (young)

The mother of Prince Charming, who works as a poor farm owner. 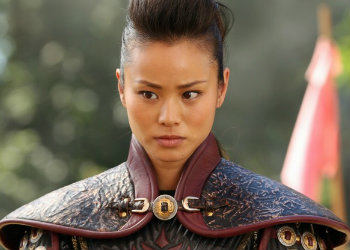 Mulan: "Even if I don't believe in his methods, I am going to honor his wishes. I'm going to keep you safe."
Played By: Jamie Chung 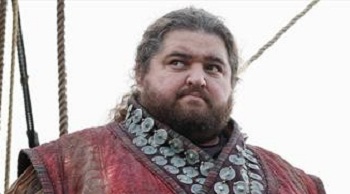 Anton: "I'm too small for back home. I'm too big for here."
Played By: Jorge Garcia
Centric Episodes: “Tiny”

The last surviving giant following the brief war between humanity and the peaceful giant race. 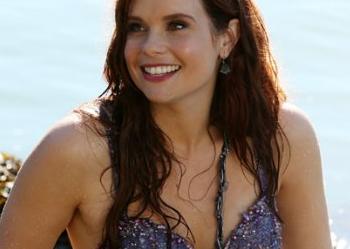 Ariel: "Can you keep a secret? ...I'm a mermaid."
Played By: JoAnna Garcia-Swisher
Centric Episodes: “Ariel”, “The Jolly Roger”

A mermaid who falls in love with a human prince.

A fearsome pirate who stole The Jolly Roger from Captain Hook.

The commander of the Nautilus and leader of a crew of outcasts seeking a life beyond vengeance.