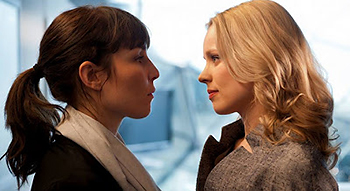 Passion is a 2012 thriller film by Brian De Palma, starring Rachel McAdams, Noomi Rapace, Karoline Herfurth, and Paul Anderson. It was nominated for the Golden Lion Award at the Venice Film Festival, but received unenthusiastic reviews from movie critics.

A remake of the 2010 French film Love Crime (2010), the plot concerns the relationship between the head of a highly successful advertising company, Christine (McAdams) and her right-hand woman, Isabelle (Rapace). At first they seem to get along well, but Christine's treatment of Isabelle becomes increasingly unacceptable. When Isabelle retaliates, things escalate and a major character is found murdered.