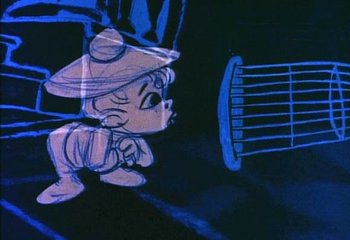 Moonbird is a 1959 animated short film directed by John Hubley and Faith Hubley, with Faith Hubley credited under her maiden name of Faith Elliott.

Two little boys, one barely out of the toddler years and the other not much older, sneak out of their home in the middle of the night. Their mission is to capture the elusive "moonbird". Carrying a rope, some candy for bait, and a bird cage, the brothers sneak into the woods in front of their house to catch the moonbird.

The voices were provided by the Hubley sons, Mark and Ray, who sound spontaneous but were actually in a recording studio being prompted by their parents. Moonbird was the first independent production to win the Academy Award for Best Animated Short Film, but many more would follow, as the big Hollywood studios got out of the animation business and The Dark Age of Animation began.

See also Windy Day, a 1969 short that took a similar approach using the semi-scripted chatter of the Hubleys' daughters, Emily and Georgia.