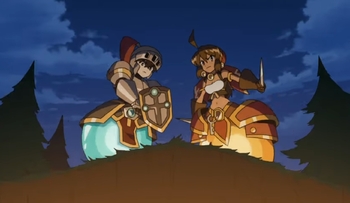 When your hips are so thick it's a ball.
Advertisement:

From WayForward Technologies, the same team that brought you the Shantae series, Marble Knights

is a quirky little mobile fantasy RPG set in the Kingdom of Roundingham, a peaceful land that's protected by the Knights of the Round, powerful soldiers that use the skills of magic marbles to enhance their attacks. Thanks to their efforts, Roundingham was safe from dangerous creatures and threats from the outside world. Until one day, when Lord Terroball decided to invade the kingdom with his own group of minions in an attempt to conquer them once and for all. Players will start out as Orbin, his sister Marabelle, or eight other characters (some of whom are recruited along the way), as they attempt to face off against Lord Terroball's armies and defeat the threat to their people.

This game contains the following examples of: