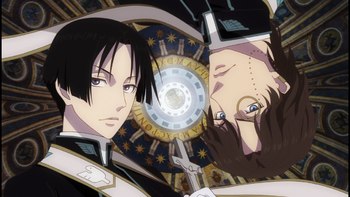 Originally published by Kadokawa Shoten, the series has 13 compiled volumes to date, with two manga adaptations by Eiji Kaneda and Anjue Hino.

The story follows Fathers Josef Kou Hiraga and Roberto Nicholas who, under the Vatican's orders, work to unravel mysteries involving so-called 'miracles'. Despite being ordained priests, they use scientific methods and logical reasoning to disclose the truth about the alleged holy events that they investigate.

Vatican Miracle Examiner has examples of: