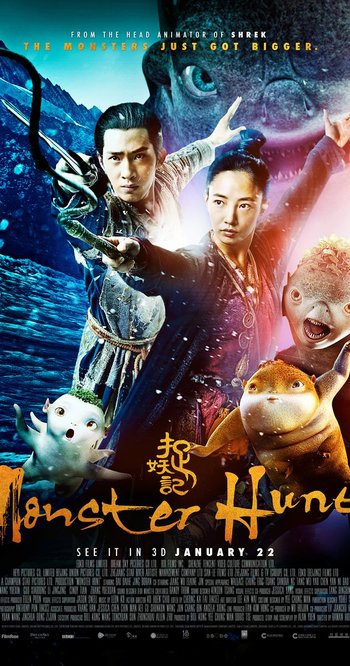 In the distant past, monsters and humans coexisted peacefully. That is until humans desired to monopolize the world. A war ensued between both sides, ending with the humans being victorious. The monsters are cast out of the village and exiled to the mountains, wherein a boundary was situated in order to prevent monsters from reentering the village. The Monster Hunter Bureau was also established in order to dispel China of any monsters that have successfully broken the barrier. Eventually, a civil war arises, and the old Monster King is usurped. Hearing about how the Monster Queen's baby will be the intermediary between man and monster, the new Monster King seeks to destroy him.

Monster Hunt is a 2015 Chinese-Hong Kong action comedy film that premiered in China on July 16, 2015 to huge success. Breaking numerous records, the film debuted as the highest grossing film in China, until The Mermaid took its record in 2016. The film eventually opened in North America on January 22, 2016 to 2D and 3D. A sequel was also announced, and is slated to be released in 2018.

Not to be confused with Monster Hunter. Compare with Undertale, a game with an uncannily similar backstory.