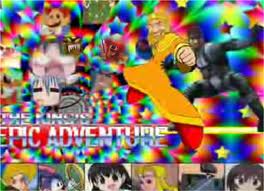 A YouTube Poop series made by user Geibuchan. It chronicles the journey and hardships of King Harkinian (commonly referred to as The King by most fans of him) from the Zelda CDI games. That's about the extent of that.

It's a lot more to it that just simply The King going on a quest. He is apparently fed up that Link and Zelda won't eat his 'dinner' (which is actually his shit), and this drives him to make the world...well...eat it. So he goes to kick some ass. So far, The King has dueled with a few of the bosses he must defeat in order to prove himself worthy.

So begins the epic series that is called The King's Epic Adventure. Expect much randomness and oddities. This being a YouTube Poop of a more unique kind (as in, one that doesn't rely solely on random clips and other stuff normally seen in YouTube Poops, though it does utilize some aspects), it's quite good.

The parts are as follows: