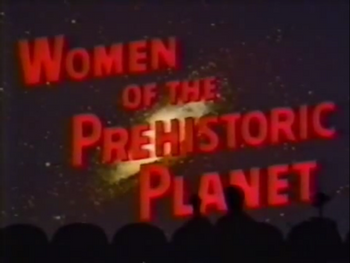 My sister saw this in junior high, all the boys had to go into the gym.
Dr. Forrester: Your film this week is a little number called Women of the Prehistoric Planet. There's really no reason for it, it just is what it is. Deal with it, musky breath!
Dr. Erhardt: Enjoy!
Advertisement:

Although its production number places it as the fourth episode of season 1, it was the last episode to be produced and aired for the season.

The last episode with J. Elvis Weinstein, but also the first with writer and future host Mike Nelson in an acting role.