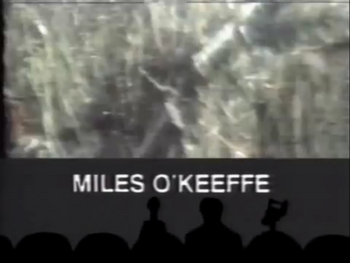 How much Keeffe is in this movie anyway?
-Miles O'Keeffe!
Advertisement:

Like Pod People, this film featured an opening credit sequence that took scenes from a different movie. O'Keeffe was allegedly amused by the show's take on the film and called Best Brains (MST3K's production company) to personally request a copy of the episode. It is one of the most popular episodes of the series. The MST3K version of the movie is available in both VHS and DVD formats. This movie is often cited as the movie you want to introduce somebody to the concept of MST3K and riffing on movies in general.

Compare with Deathstalker and the Warriors From Hell and Quest of the Delta Knights. The Rifftrax and revival series also riffed the original film Ator the Fighting Eagle.note If you're wondering why they went straight to the sequel, it's likely due to the first film having a ton of rape and quasi-incest material.

Ator: Thong, the fish is ready.