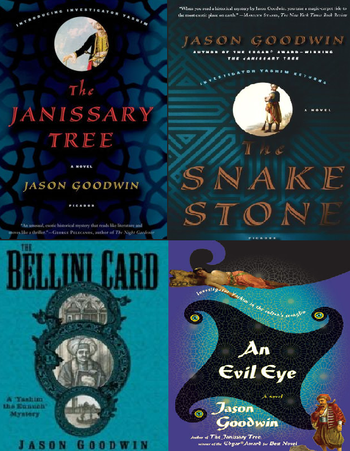 Think all detectives are handsome devils that get all the girls? Well Yashim Togalu isn't. Not that the girls dislike him; or even that he isn't partial to their attention, insofar as he can receive it. The trouble is Yashim has one limitation which prevents him taking his desires in this area beyond a certain point. That is an obvious limitation placed on him by Ottoman tradition. Yashim is a Eunuch.
Advertisement:

Yashim is a faithful servant of the Sultan and lives in Istanbul during the nineteenth century. His hobbies are cooking and fighting crime. For the labyrinthine, and Byzantine complexities of The Great City are full of plotting. But with his best friend Stanislaw Pawlewski, an eccentric diplomat from the now extinct Polish Commonwealth (maintained at the Sultan's expense as a Take That! to Russia and Austria), Yashim uncovers the fiendish schemes.

Yashim lives in a changing world with a memory of the glories of Ottoman civilization, but with the modern world closing in. He must adapt, yet he still pays respect to the Good Old Ways.

The Yashim series is written by a historian of the Ottoman Empire, Jason Goodwin.

Books (so far) include: