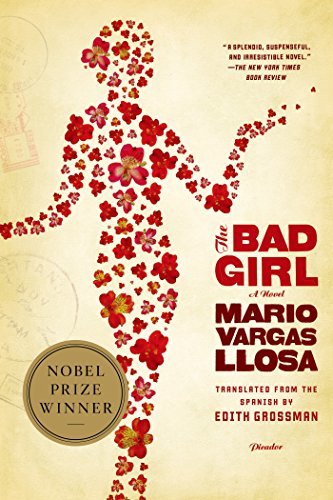 The Bad Girl: I've never said 'I love you, I adore you' and really meant it. Never. I've only said those things as a lie. Because I've never loved anybody, Ricardito.
Advertisement:

In the summer of 1950 as a teenager, Ricardo Somocurcio falls in love with the vivacious blonde girl in Miraflores Peru who says she and her sister are from Chile and that her name is Lily. By the end of the summer she is found out as a fraud and disappears just as quickly as she came. Years pass and after graduating from law school, Ricardo goes to live out his dream of living in Paris and runs into the same girl again, this time as a Peruvian revolutionary named Comrade Arlette. She leaves for guerrilla training in Cuba, promising to come back to him, but never does.

While working as an interpreter Ricardo runs into "the bad girl", the only name he can really give to her, this time as the wife of a French diplomat name Madame Robert Arnoux. As Mrs. Richardson, the Mexican wife of an English horse breeder, as Kuriko, the mistress of a sadistic Japanese business man, again and again Ricardo finds her as she changes men and identities, but no matter how cruel she is or how many times she hurts him, he is doomed to love the bad girl forever.

The novel tells the story of the love affair between Ricardo and his "Bad Girl" while also including information about the history of Peru as seen through the eyes of Ricardo and the transformations happening in Europe spanning 40 years.