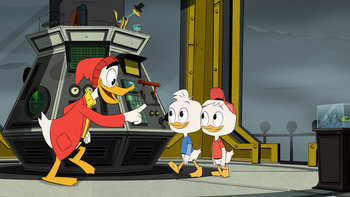 Is it really better down where it's wetter?

Huey and Dewey are led on an adventure by their distant cousin Fethry, who takes them to the depths of Scrooge's deep-sea laboratory.

Full Recap
The City of Duckburg!

In the Manor's study, Huey excitedly shows Dewey a sample of a tree their Uncle Scrooge discovered that, according to Huey's knowledge of Dendrochronology, experienced three leap years in a row! Dewey is...decidedly unimpressed, as well as unamused that he was dragged out from the bathroom during a soak for the sake of his older sibling's nerdy hobbies and would rather deal with something he actually finds exciting.

Their discussion is interrupted by the "ringing" of a Tin-Can Telephone on Scrooge's desk caused by an unknown caller. Scrooge and Donald enter the room with a frame for the wood sample and identify the caller as Fethry Duck, Donald's cousin who is stationed at Scrooge's top-secret deep sea lab. Huey and Dewey are eager to know about this newly-discovered relative and where he works, but Scrooge (somewhat more considerate than Donald) advises them against consorting with Fethry, as their previous endeavors with him usually involve going on some perilous and life-threatening adventure for the sake of seeing something Fethry considers interesting like an unusual barnacle formation. Nonetheless, the boys are enticed by the opportunity to go on an adventure with their "cousin" and rope Launchpad into giving them a ride to Fethry's location in Scrooge's submarine.

En route, Huey assumes Fethry to be a marine biologist and expresses his excitement to see what Fethry has discovered while Dewey is anticipating the chance to name some undiscovered sea creature after himself. Once they reach the lighthouse where Fethry is stationed, the boys leave Launchpad to meet their cousin while Launchpad is drawn to the calls of his "old love" Oceanica.

Reaching the top of the buoy, the boys find Fethry hanging upside down, decompressing from being in the deep sea. Of course, the silly part is that he was holding a water glass upside down so when he flips back down, the water falls out. Introducing himself as Donald's favorite cousin, Fethry agrees to take them both down to the undersea lab to see the wonders of the deep.

"The Tropes of Cousin Fethry!"

And so once again, the day is saved thanks to... the Duck Brothers!