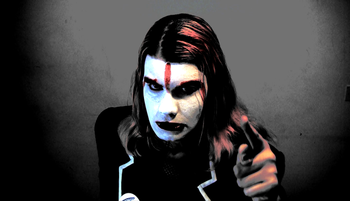 ALL HAIL THE LECHER BITCH
"I'm a shy, meek, small-voiced person who understands subtlety, loves people in black masks, and is really greatly enjoying Left Behind. Oh, and I love the cock."
— Diamanda Hagan, playing against type
Advertisement:

is a Northern Irish Butch Lesbian and Evil Overlord of the nation of Haganistan, with a mysterious past (who might have previously been

Jerrica "Jem" Benton in a cartoon) and a sideline as a film critic and the host of Diamanda Hagan: Lecher Bitch. She mostly reviews bad movies, but has also done a recap/review of the series Bonekickers, Urban Gothic and Adam Adamant Lives!; Twatty Who Reviews, focusing on the worst episodes of Doctor Who, and the Homeless Bsterrd Theatre Reviews starring Aleister D. Homelesssb’sterrd. This is similar to Bum Reviews, but focusing on theater (she even describes him as a distant cousin of Chester A. Bum).

She can also be seen here

, was on Channel Awesome until March 2018 and RT Gomer Productions

She was a member of Reviewtopia, but she left in January 2013 after an incident at the MAGfest Fan Convention involving members of the site (notably Lord Kat) abusing and exploiting an overly drunk woman to get viewers on a live stream. She also appeared with her real life husband The Omega on Project Million Entertainment, for a podcast called Lesbian Talk, which has since migrated to The Omega's YouTube channel.

Aside from her in-character Video Review Show, she is also involved in: