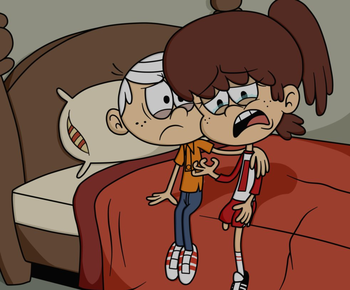 "And without my leg...I...can't do that anymore. My dreams are gone; taken from me so UNFAIRLY."note Without A Leg To Stand On

Fan Fiction. We can't ever be sure what is going in our own head when writing them, but if the readers wanted tears, they got their wish.

B
The Baby-Sitters Club

And believe it or not, things still manage to get worse. Is it any great wonder Jonathan Crane became the Scarecrow?

Frozen even implies Sayoran is Driven to Suicide!

Charlie and the Chocolate Factory

"The evil is gone…you are safe now…"

"Don't be sad… remember our promise…we will meet again..."

Gran Kuwagamon - no, Wormmon - had died in front of him for the second time in his life. He had broken down when that happened. Everyone tried to comfort him. Tried to convince him that Wormmon would return to the Village of Beginnings. But he never did. Ken knew that he wouldn't. Fate was against him and had refused to give him a third chance at happiness.Thankfully, Wormmon is reborn as Leafmon again at the end.

L
The Land Before Time

Snow White and the Seven Dwarfs

T
Tales of the Frog Princess

The World Ends with You

And now Bella knows she will never get it back.

Another Death of a Dynasty remake

takes the Tyrannosaurus Rex mother's already heartbreaking death and takes it Up to Eleven. Unlike in the original episode, the father T.rex is not driven away by his mate and instead stays to help her look after their young. But they still get into a fight with an Ankylosaurus, and not only is the mother still fatally injured, as in the original, but her mate is also killed by the same Ankylosaurus. This means that not only do the babies still suffer the same fate as in the original, but they watch BOTH of their parents die.

Your Lie in April

Z
(No examples yet.)
Other