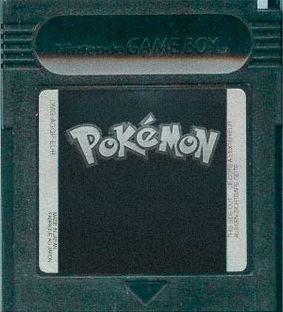 Pokémon Black is a Pokémon creepypasta about, naturally, a weird bootleg game in the series.

The protagonist is an enthusiast of Pokémon bootleg games and ROM hacks. However, they've brought one game that they've been unable to find info online about: a Pokémon Red and Blue hack called Pokémon Black. The protagonist doesn't actually own a copy of the game anymore, but they do remember it thoroughly. The creepypasta consists of their memories of the game.

The story goes that alongside the usual starter, the storyteller got a "ghost" Pokémon that they could never switch out of their party. No opponents were capable of attacking it, and its only move, a bizarre variant of "Curse", was almost always a One-Hit KO. If they fought a trainer, each curse caused the ball containing the opponent's mon to disappear from their roster. Once they lost all their Pokémon, they could curse the trainer directly; killing them and replacing their overworld sprite with an Instant Gravestone. After beating the Elite Four, the player got a Flash Forward to their character as an old man, recalling every Pokémon and trainer they cursed, at which point their ghost finally turns on them and subjects the player to a Hopeless Boss Fight. When their HP hit a critically low level, it cursed them and the screen turned to black and did not change. Upon resetting the game, the protagonist discovers that their save file was erased.

The story predates the official Pokemon Black, so to avoid confusion, it has since been referred to as Pokémon Creepy Black. You can listen to someone read the story here

Many years after the story was made, a fan made a ROM Hack that recreates the game as described in the story. One can download the patch for it here