List of characters and their tropes from Kimba the White Lion. Expect spoilers!! 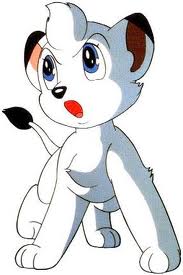 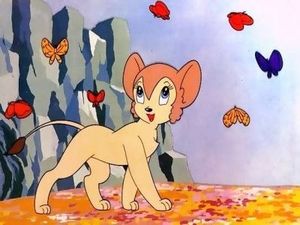 Claw/Bubu
A villainous one-eyed lion.
Cassius/Toto/Silkar/Sylvester/Shaka
A black panther in league with Claw.
Tom and Tab/Dick and Bo
A duo of goofy hyenas in league with Claw and Cassius.
The Vulture
An unnamed vulture that sides with Bubu in the 1989 adaptation.

Speedy/Bongo
A leopard cub.
Dash, Dinkie, and Dot
A Cheetah, Sand Cat, and Leopard constantly seen with each other.
Boss Rhino/Sebastian
An agressive rhino who acts as a rival to Kimba, who despises humans.
Pagoola/Kelly Phant & Bizo
An aggressive elephant who highly disagrees with Kimba's views on humans and his bratty son.
The Mammoth/Great Mother
A Woolly Mammoth who lives on Mt. Moon.