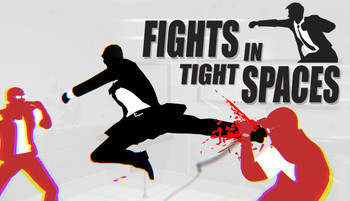 Fights in Tight Spaces is a single-player, turn-based, deckbuilding roguelite based on the moment-to-moment decision making in Fight Scenes. You and your enemies are represented on a small square grid, and possible actions you can take are represented by a hand of cards. With those cards, you must outplay and outwit your opponents to be the last one standing.

In a world where espionage consists mainly of analysts poring over data packets, Section Eleven's role is to find more direct solutions, taking on criminal organizations that fall beyond electronic communication. You are one such agent, tasked with taking a hands-on approach to keeping the peace, via smashing your fist into people's faces and people's faces into other things.

The game was developed by British studio Ground Shatter, published by Mode 7 Games, and released on Steam in Early Access on February 24, 2021, with the full release happening on December 2 that year.