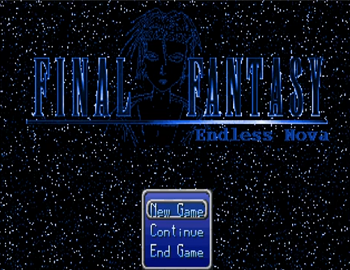 Final Fantasy: Endless Nova is a fangame based on the knuckle-reddeningly popular Final Fantasy franchise, made in RPG Maker 2000. Taking the same futuristic approach as the seventh and eighth entries in the official series, the game follows the exploits of Deren Star, an odd jobs person who, along with his android companion Motor, is unexpectedly pulled into an adventure to save Hell's Dome, a solar system surrounded by an impenetrable asteroid belt from an artificial supernova. Not quite as artificial as that, though.

Along the way he meets a number of companions who all end up helping him for some reason or another; Lisbeth, an amnesiac girl with cat ears, a thief named Ibis, a Blue Mage named Ellana, a monk named Fuban, and a walking, talking doll named KioSen, who used to be human.

sometime around 2002 and is still available to play as long as you have RPG Maker installed on your machine. It was notable for being one of the Final Fantasy fangames out there that, despite some odd little shortcomings, was actually fairly warmly received. It incorporated way to learn spells that worked like a cross between Final Fantasy VIII's draw system and II's spell tomes, and each character had a unique set of abilities to make them all worth trying out, adding more replay value than was expected of RPG Maker titles at the time.