Literature / The Way to the Lantern 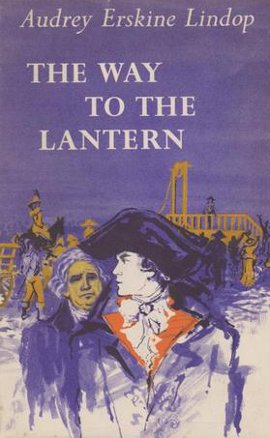 An actor has a thousand souls, not one to call his own.
Advertisement:

The Way to the Lantern is a 1961 historical adventure novel by Audrey Erskine Lindop set before and during The French Revolution.

Paris, 1793. Philippe Vicomte de Lambrière is brought before the Committee of General Security on accusation of counterrevolutionary intentions, a crime punishable by death. At the same time, the Committee of Public Safety seeks to execute an English spy named Anthony Buckland.

The problem: they are the same man, a man who desperately insists on being an English actor named Roberts and who claims both de Lambrière and Buckland to be fake identities he made up out of necessity. Neither committee is inclined to believe him, especially given that the actor Roberts has reportedly drowned in a river in England four years ago. The two committees’ rivalry over his true identity is the only thing that keeps Roberts from being sent to the guillotine. For now.

The novel chronicles Roberts’ adventures and misadventures that led to him being arrested under two different fake names. It starts with his early days in a third-rate theatre group and his first meeting with Manager Smith ("M.S."), who becomes a friend and mentor to him and tries his best to help Roberts make a name for himself at a renowned theatre. The two are constantly broke, however. On their never-ending quest for money, they cross paths with the rich Lizzie Weldon, who has an unusual request – she wants Roberts to play her aristocratic suitor in order to make her chosen one jealous enough to finally propose to her. What initially sounds like easy money ends up causing so much trouble that they are forced to fake their own deaths and flee to Paris where they become entangled in the unfolding Revolution.

The Way to the Lantern is meticulously researched and tells a complex adventure story while providing a vivid impression of the French Revolution through the eyes of the lower class. It has unfortunately been out of print for years.

The Way to the Lantern provides examples of: