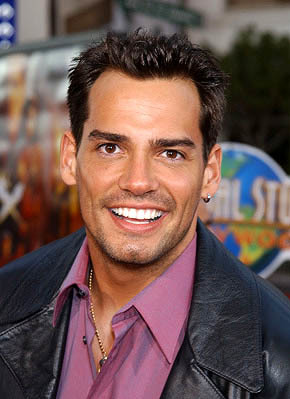 Cristian de la Fuente (born as Cristián Andrés de la Fuente Sabarots, March 10, 1974 in Santiago, Chile) is a Chilean-American actor that started in Chile as a telenovela actor and model established in the United States since the Turn of the Millennium, first as a telenovela actor for Telemundo and Univision and later having the big jump to Hollywood, working with renamed actors like Sylvester Stallone and John Travolta.

While in his native Chile is very known for his telenovelas in The '90s, worldwide he's more known as Memo Heguy in Driven, Father Rodrigo in Robert Rodriguez's Vampires: Los Muertos and Lab Tech Sam Belmontes in CSI: Miami. He's one of the first Chilean known actors in Hollywood, along with actress Leonor Varela, who also shared appearance as a couple in the Mexican mini-series Jennifer Lopez presents: Como Ama una Mujer. Recently he became famous for making the voice of Pepe Cortisona, Condorito's rival in The Movie.

Cristian is also married with the Chilean actress, model and presenter Angelica Castro, who also made a career in the US as him, mostly known as one of the faces of E! for Latin America.