open/close all folders
The Warriors

The Warchief; second in command. A man of few words who thrives on action. A loner willing to step up when it counts.

Played by: James Remar
"I'll shove that bat up your ass and turn you into a popsicle."

The Muscle; cocky, loud and always up for a rumble. A loner who looks out for himself.

As Warlord, Cleon is the leader of the Warriors. He is the foundation of this gang.

Played by: David Harris
A real live soldier. Looking for a good time and all the action he can handle.

A voice of reason. Goes along with the group, always wearing a Stetson.

The youngest of the gang. A writer that gets up wherever he can. A little soft around the edges, but still able to maneuver around any obstacle.

A real heavy soldier. Disciplined, independent and reserved. He can rumble with the best of them.

A pretty heavy brawler. Pessimistic but loyal. A reliable ally who won’t disappoint.

The Riffs are the biggest gang in NYC, controlling and influencing every piece of turf in the city. Their president is Cyrus, a poetic revolutionary who envisions one unified gang ruling the streets.

Played by: Roger Hill
"Can you dig it?"

The leader of The Gramercy Riffs. He summons the gangs of New York to a meeting in the Bronx to discuss their working together to take over the city, where he is shot dead by Luther, setting the main plot in motion.

The second in command of The Gramercy Riffs.

A group of outcasts and punks, the Rogues are chaotic. They’re not the heaviest set in the city, but their abrasiveness and unpredictability even out the odds.

Played by: David Patrick Kelly
"Warriors! Come out to play!"

The leader of The Rogues. He murders Cyrus and frames The Warriors, setting the main plot in motion. 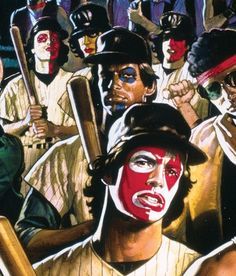 A group of real major leaguers who bring their A-game to every rumble. Packing bats and plenty of muscle, the Baseball Furies’ rep stretches through every network in NYC. 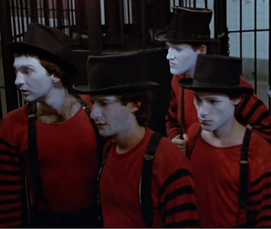 A quiet, but solid clique from Soho that dress like mimes. Very territorial, the Hi-Hats won’t let anyone drop their colors where they don’t belong. Led by Chatterbox, these self-proclaimed art aficionados are a messy set to battle with. 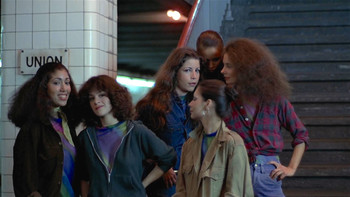 The Lizzies are an all-girl gang who can hang with the boys. Using their God-given gifts to their advantage, The Lizzies can easily sneak their way past any crew’s defense.

A small time outfit that keeps trying to move up by boasting about raids that never happened. At the bottom of the minor leagues, they try to make up for being soft by swarming with numbers; but a crew that can’t battle doesn’t have much of a future.

The Punks are a serious bunch of brawlers. Mean mothers looking for a good time and a good fight. This clique won’t back down from anything

A bunch of tough, crass anarchists looking to rock or rumble any chance they get. One of the heaviest sets in the city, these skinheaded thugs are a serious outfit to contend with.

The Hurricanes are a family-based set, made up of hustlers and swindlers. These brawlers drop their colors in Spanish Harlem and love a dirty fight.

Tough enough to keep other colors off their turf, the Boppers keep Harlem smooth. A softer set that grooves with style instead of muscle.

The Savage Huns are skilled in Martial Arts and can withstand a hefty beating. They deal in extortion and loan-sharking and have some heavy numbers. Their Warlord, Ghost, is a very spiritual and disciplined martial artist who never speaks.

The original Coney Island gang and led by a backstabbing drunk, Virgil. The Destroyers are a pretty heavy set and put up some solid opposition in the battle for Coney’s turf.

One of the heaviest sets in New York. The Satan's Mothers are a ruthless gang who deal in knives and flash. They won’t let anyone mess with their rep.

The Moonrunners put more emphasis on getting up than they do brawling, but they aren’t afraid to drop the paint and battle it out when other crews come armying into their train yard.

A cocky bunch of trust fund kids who live in a world where money isn’t an object and petty crime is just a thrill ride. Still a set that can fight with the best, the Jones Street Boys have Bensonhurst locked up tight.

A serious set from Brooklyn that won’t hesitate to bring down a whole clique if that’s what it takes to survive. Street smart and strategic, they’ve earned a lot of respect from other gangs