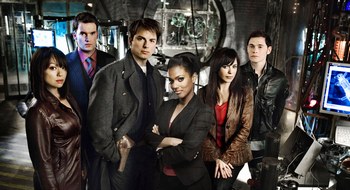 Everyone, welcome Martha Jones to Torchwood!
Owen: So, you and Jack go back a long way?
Martha: Forward and back, really.
Owen: What brought you together?
Martha: Let's just say...we were under the same Doctor.
— Martha Jones coyly introducing herself to Owen Harper
Advertisement:

While Weevil hunting one evening, Tosh and Owen come across the corpse of a man who died under mysterious circumstances. Jack calls in Martha Jones, now a doctor working at UNIT, to help with the investigation.

Martha is welcomed warmly by Torchwood. She catches up with Jack regarding the events of the lost year and tells him that her family is gradually recovering from the trauma. She also befriends Gwen, asks Ianto what Jack is like in bed ("innovative... bordering on the avant-garde"), virtually ignores Tosh and flirts with Owen. Jack and Martha once again share a moment about the Doctor apparently being oblivious to them and speculate that The Doctor got Martha the U.N.I.T job she has as an apology.

Tosh finally — finally — asks Owen out on a date. He's fine with it, though not exactly enthusiastic.

It turns out there is a series of deaths which only have one thing in common: death by hypodermic needle in the eye and a connection to a mysterious pharmaceutical company aptly named the Pharm. The patients miraculously recover from incurable illnesses, only to die from some kind of parasite soon after. Martha volunteers to investigate undercover as a test subject.

The team discovers that the Pharm has been using alien mosquitoes as guinea pigs to manufacture miracle cures. Martha is tortured and implanted with an alien chestburster. Owen saves her life just in time, but he gets shot by Dr. Copley. Jack immediately puts a bullet in Copley's head, but Owen is lying there on the pavement, critically bleeding out before his horrified teammates. Martha can't save him from his injury, and Owen dies. Heavily saddened, Jack must come to terms that he's lost another friend.