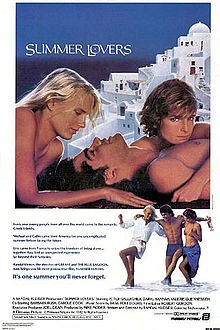 Summer Lovers is an American Comedy/Drama/Romance film from 1982 starring Daryl Hannah, Peter Gallagher and Valerie Quennessen and was directed by Randal Kleiser and released by Orion Pictures. It tells the story of a young American couple, Cathy Featherstone (Hannah) and Michael Pappas (Gallagher), on a summer vacation in Greece after graduating from college. Michael is taken in by the casual nudity on the beaches and becomes interested in Lina (Quennessen). Cathy looks to another guy, but eventually settles on a trio with Michael and Lina (though do see the Headscratchers page).

As usual, you can find the basics at The Internet Movie Database