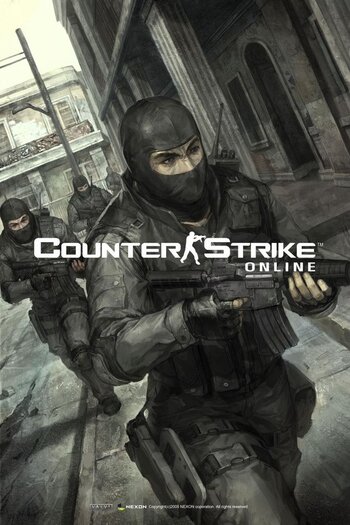 2008, I am BACK!
— Counter-Strike Online announcement trailer.
Advertisement:

Counter-Strike Online is a version of Counter-Strike targeted towards Asia's gaming market. It is developed by Nexon Corporation of South Korea with oversight from license-holder Valve Corporation, essentially modified Counter-Strike v1.6 with bits and pieces assets from Counter-Strike: Condition Zero. It uses a micropayment model that was managed by a custom version of the Steam back-end until the game itself were transferred into Steam.

The game is originally released in various Asian countries: South Korea, Japan, Republic of China, Taiwan, Singapore/Malaysia, Indonesia and Thailand, before released in Turkey, and then released for Russia, Europe and Americas as Counter-Strike Nexon: Zombies. A recent update would finally allow the latter three of the Asian countries mentioned above after their service had long shut down.

Aside from the same-old-same-old look of Counter-Strike 1.6 with bits and pieces of Condition Zero, Online naturally provides more original content for the game, new weapons, player models, game modes and much, much more. Some game modes are based on custom mods for the original Counter-Strike, such as Zombie Mode, Zombie Scenario Mode, Gun Deathmatch, Fight Yard and such.

It also had a sequel simply titled as Counter-Strike Online 2, which is a beast of its own as it's built from the ground up with the Source engine, unlike its predecessor. Unfortunately, it was shut down in 2018 and didn't even have an English-language version (while Counter Strike Online, eventually having its local regional servers transferred into Nexon Zombies, stay up and running while still adding new content).