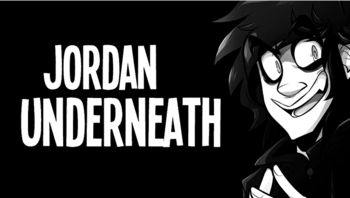 Jordan Underneath is the host of his self-named Internet Review Show, with a taste for the dark, eerie, and flat out disturbing. Subsequently, the bulk of his videos focus on Horror Video Games, though he has occasionally strayed into less creepy territory, albeit rarely.

In 2017, however, Jordan began focusing instead on making original Black Comedy, Surreal Humor, or Surreal Horror short films, utilizing odd puppets, props, and various accents, changing his name several times to emphasize his new focus (it is currently Jordan Go To Sleep). On June 17th, 2018, Jordan removed all videos before the puppet era of his channel, but he would later create a new channel called Jordan Underneath Archive

where he re-uploaded many (but not all) of his Jordan Underneath-era videos.

Jordan Underneath provides examples of the following tropes: