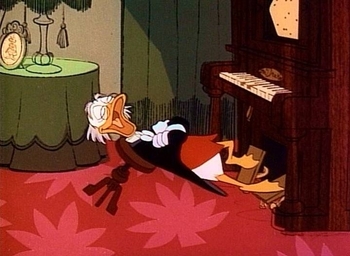 "A Symposium on Popular Songs" is a 1962 animated short film (19 minutes) from Disney, directed by Bill Justice.

It is a wholly fictional lecture about the history of popular music, delivered by Professor Ludwig von Drake, Donald Duck's uncle. Ludwig the duck, addressing the viewer directly, claims to have himself invented every genre of 20th century popular music, starting with ragtime, and then going through 1920s jazz, 1930s big band numbers, 1940s crooners, boogie woogie, doo-wop, and 1950s rock. Each of these genres is illustrated by a song supposedly written by Ludwig.

This marks the only theatrical appearance of Von Drake.