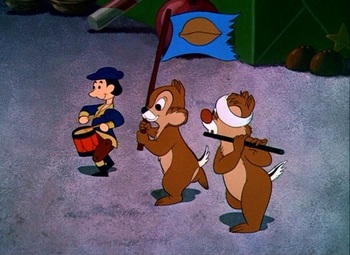 Chip 'n Dale are slumbering in a dead tree trunk in a wintry forest when they are disturbed by the thudding of an axe. Turns out that it's Christmas, and Donald Duck is chopping down a Christmas tree.

Intrigued, the chipmunks sneak over to Donald's cottage. When they see all the goodies inside—candies and fruit and, most important, nuts—Chip and Dale invade the cottage in order to steal Donald's stuff.